The Australian dollar is the official currency of Australia and seven of its external territories, plus the sovereigh states Kiribati, Nauru and Tuvalu.

On the global forex market, the Australian dollar is the fifth most traded currency by value.

Several factors contribute to making the Australian dollar so popular among FX traders, including: 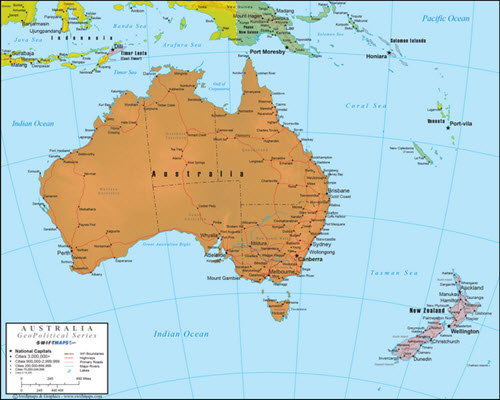 Countries where the AUD is official currency

Kiribati (alongside the local Kiribati dollar)

Tuvalu (alongside the local Tuvaluan dollar)

Just like the pound sterling (until 1971), the Australian pound did not follow the decimal system. 1 pound equalled 20 shillings, and each shilling equalled 12 pence. 1 pound was thus worth 240 pence.

When Australia shifted from the Australian pound to the Australian dollar in 1966, they also adopted the decimal system for their currency. (The pound sterling did not become a decimal currency until 1971.)

The Australian 50 cent coin is one of the world’s largest coins that is in normal everyday use. It’s diameter exceeds 31 mm and it weighs 15.55 grams. Australia has a tradition of issuing commemorative 50 cent coins, and such coins have for instance been issued to commemorate James Cook’s exploration of Australia, Queen Elizabeth II’s Silver Jubilee, and the Australian Bicentenary. In 2013, Australia issued a triangular (!) 5 dollar coin to celebrate the 25th anniversary of the opening of Parliament House. This coin is nearly 100% silver.

Australia developed and pioneered the use of polymere in banknotes and released their first polymer money in the late 1980s. Nowadays, all Australian dollar notes are made of polymer.